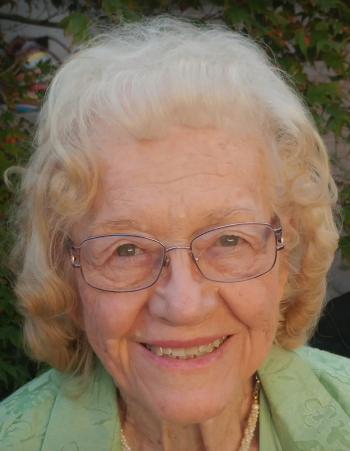 On Tuesday, February 18, 2020, Clara “Lolly” Nyce, loving wife and mother, passed away at the age of 89.  Lolly was born in Philadelphia, Pennsylvania on July 23, 1930. She married Raymond Nyce in 1948. Together, they raised four children. Lolly was dedicated to her husband and wholeheartedly involved herself in his work and hobbies. She moved to 4 states to advance his career and remained devoted to him throughout her life. She was proud of her children’s accomplishments including four college bachelor’s degrees, two master’s degrees, and one doctorate degree. Lolly had a deep love of the arts and furthered her skill and knowledge by taking art courses at Weber State University in Ogden, Utah. Following high school, she worked in the art department of the Franklin Olean Tile Company. She was active in the local art community as a member of the Western Art Guild, Palette Club, and Beehive Rock and Gem Club where she held various offices and contributed to the newsletter. She was a talented artist using acrylic and oil pastels. Lolly created portraits, animal images and Native American scenes. She shared her love of art with all who knew her and volunteered time demonstrating using rocks as a medium to create lifelike paintings of animals.

In lieu of flowers, donations in memory of Lolly may be made to the Weber County Animal Shelter at 1373 North 750 West, Ogden, Utah 84404. Condolences may be shared at www.aaronsmortuary,.com

To order memorial trees or send flowers to the family in memory of Clara "Lolly" Nyce, please visit our flower store.