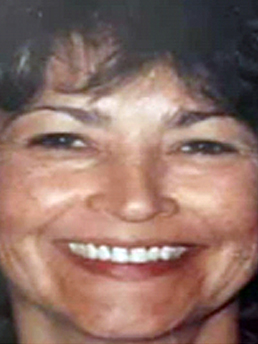 Joan (Ronnie) Veronica Hales passed away on April 9th, 2020 at her home with her husband Mike Hales of Ogden Utah and her bestest friend in the whole wide world Chloe at her side.  Ronnie passed away at the age of 65 after a year long battle with brain cancer.

Ronnie lived a full and wonderful life. Some of Ronnie’s favorite hobbies were scrapbooking, landscaping, bead work, interior decorating, riding the Harley, camping and being outdoors. Ronnie was a champion of animal rights/she believed that all pets should be treated as you would like to be treated. Some precious moments recalled by Ronnie’s siblings were summer camping trips, pinon picking, meal sharing and cooking. In the last year of Ronnie’s life, her hearts cry for everyone was “don’t take anything for granted.  Life is too precious, and it is so beautiful.” Ronnie often verbalized her appreciation for her husband and siblings during her battle with cancer.  Ronnie referred to her siblings as her “Warrior soldiers” and she was the “warrior” going into battle.  Ronnie proudly said that her family, many nieces and nephews and furbabies were the most wonderful thing in her life.  Ronnie came to find the Genesis Church where she found much comfort, peace and excitement in her spiritual pursuit. Ronnie’s last wish was to reunite with her children and to spend Easter with her grandchildren. One day that day will come.

To order memorial trees or send flowers to the family in memory of Joan (Ronnie) Veronica Hales, please visit our flower store.