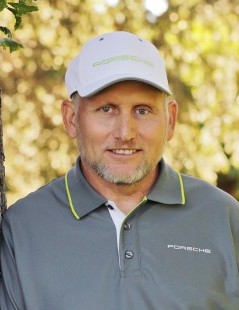 John Edward Scharf took his final lap and crossed the finish line of life on July 17th, 2018 at the age of 54, after a long battle with metastatic prostate cancer.

John was born in Glendale, CA on November 22, 1963. He was the fourth born of six children to Paul and Nancy Scharf. John enjoyed working on cars and participating in 4-H raising pigs and chickens. Few things held his attention for him in school. He had a love for working on anything mechanical, being outdoors, building and an appreciation for sunsets.

John’s hobby was racing cars. His passion for racing began at a young age, and he shared the hobby with his two brothers. He started with midget Sprint Cars on the dirt track, then later Legends, and Thunder Roadsters on oval and road course tracks from Oklahoma to California. At one point he was competing in three classes on the same weekend.  He enjoyed spending his spare time as an instructor for the Porsche Club Association, NASA and Lapping Days.

John began his construction company, Dunn-Rite Construction, in 1987. His passion was building beautiful homes for his customers, that often became his friends. He was well known for his enduring work ethic and even while ill he was determined to provide for his family.

John married Michelle Porter on June 27, 1987, in Citrus Heights, CA. Later sealed for time and eternity on April 26, 1994, in the Salt Lake Temple. Together they have four children, Joshua, Hannah, Hailey, and Johnathan Hunter. They have made their home in Davis County for the last 25 years. John’s drive in life was providing for every need for his wife and family. John loved serving others. His favorite calling as a Latter Day Saint was serving the young men who he had a great deal of understanding for the difficulties they faced. He had a love for his Heavenly Father and believed in the Plan of Salvation. He was grateful for the Atonement and had a firm belief of life after mortality.

John had a gift for making those he met feel special, his desire to teach and uplift others made an impact on many of those who knew him. He was known both for his wise advice, his goofy sense of humor and taking his eye out.

John is survived by his spouse Michelle, children Joshua (Brianna), Hannah, Hailey, J. Hunter and Keith Hinman. Grandchildren, Camber and Caden. His parents, Paul and Nancy, and siblings Debbie Barlow, Cathy Slodyczka, Jennifer Kwan, David Scharf and numerous nieces, nephews and cousins that he dearly loved. He was proceeded in death by his brother Daniel Scharf and brother in law Jim Barlow.

The family would like to extend their most profound appreciation to Dr. Neeraj Agarwall, Jared Thorley, Wendy, Dr. Brogan and Dr. Sindt and the many other staff who offered excellent care and compassion at Huntsman Cancer Institute.

We look forward to the day when we meet up with John again in the Winners Circle.

There will be a celebration of life held at 7 pm at the Utah Motorsports Park in Erda, Utah on August 4th, 2018. In lieu of flowers, donations can be sent to the Huntsman Cancer Center. Please RSVP http://evite.me/9G4RstW13f

To order memorial trees or send flowers to the family in memory of John Edward Scharf, please visit our flower store.