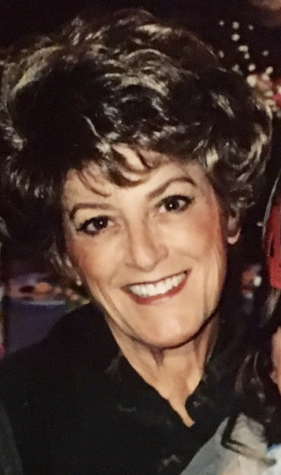 On Monday, April 15, 2019, Judith Hamilton Lewis passed away peacefully in her own home with her son by her side and her beloved Zoe in her lap.

Judith Mary Hamilton was born November 21, 1938 to Homer and Jan Hamilton in Des Moines, Iowa.  She and her brother Andy Hamilton grew up moving from Army base to Army base throughout their childhood, which provided for indelible memories and rich stories.

Even at a young age, Judy was an artist and a person with an eye for design and detail.  Her father dubbed her “Prunie Doodler”, as she was always busy organizing and creating.  She earned her own money doing a base paper route, babysitting and working in an ice cream shop.

Judy went to 8 schools during her primary through high school years, with memories of being driven to school in a tank when needed.  She and her brother spent many hours in the car, traveling around the US, from San Clemente, California Tooele, Utah, to North Dakota and Iowa.

Judy met her husband, Jim Lewis, while attending UC Santa Barbara in Southern California.  They married and moved to Canoga Park, California, then North Carolina and finally settled in Santa Ana, California to raise their two boys, Jim Lewis III and John Lewis (currently of Eden, UT).  Judy was the epitome of a housewife as she kept a gorgeous home and cooked all of the family meals and even sewed much of the boys’ wardrobe.

During her years as a stay-at-home mom, Judy became “the Bear Lady” because she made collectible, felt or mohair bears.  Her family is lucky to now have several of these works of art, but she made and sold hundreds of bears from her home.  Her bears and stories have been published in magazines and books.

When her boys were in college, Judy worked at the Red Lion Hotel in Costa Mesa, California, managing the gift shop, where she designed their magical shop window and elegant store.  She also volunteered at the Bowers Museum in Santa Ana and helped with their major donor events and hosting the VIPs.  She and Jim traveled to Egypt, Alaska, throughout the US, and much of Europe.

In 1998, Jim & Judy moved to Eden, Utah where Judy lived for the last 20 years.  Judy was an integral part in supporting the Lewis Homes and Wolf Creek family through her design and decorating expertise.  She made countless friends who know her as “Grandma Judy”.and will remember her love of chocolate and her attitude and effort to “Choose Happy”.

Judy was an amazing “Grandma Judy” to her 7 grandchildren – always having chocolate chip cookies and a comfy house to “hang out” and share her amazing scrapbooks or watch movies in her custom movie theater.

Judy’s greatest heartbreaks were the death of her beloved husband and best friend, Jim Lewis, in February 2000, and the recent death of her first born son, Jim Lewis III, at the age of 54, in March 2018.  Her courage and strength through these losses were an example for those who love her.

She was also preceded in death by her parents, her brother Andy Hamilton, her Aunt Gladys and Uncle Stan and many cherished friends and relatives.

Judy’s family would like to thank the wonderful people who helped her at the Mark Lindsay Dialysis Center, “Bee” and Lynn who helped her with kind hearts her last two years, and the many friends near and far who brightened her days.

Judy loved the beautiful Ogden Valley she lived in and hoped to see the trail from Wolf Creek to Eden Center completed.  In lieu of flowers, donations to Weberpathways.org in Judy Lewis’s memory would be greatly appreciated.  The phone number for Weber Pathways is (801) 393-2304.

On Monday, April 22nd, friends and family will gather at the Wolf Creek Resort Golf Course to Celebrate her amazing Life.  Join us from 6-8  pm in the Mountain View Room (currently Links Restaurant) at the pro shop.

There will also be a Celebration of Life with California friends on Sunday, April 28th.

To order memorial trees or send flowers to the family in memory of Judith Hamilton Lewis, please visit our flower store.