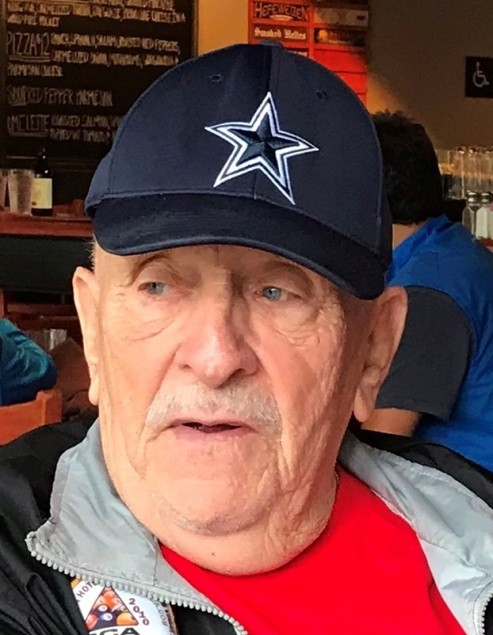 Kenny was raised in Iowa, served in the U.S. Navy, and when he returned from the service started a family with then-wife Avanelle L. Eamer (married in 1954, later divorced); together they had four children. He was a proud member of the Teamsters Union, working as a truck driver. His work took him from Iowa to Nebraska, Illinois, Kentucky, and eventually to Texas where he retired at age sixty-five. While in Dallas, he met and married the love of his life, Natalie Jo Pfrimmer; they shared many wonderful adventures prior to her devastating passing in 2007. Kenny loved his children and grandchildren with all of his heart and was fortunate enough to experience the joy of becoming a great-grandfather.

Beyond the enjoyment of being on the road driving an “18 wheeler”, Kenny was happiest when he had a nice car, money in his wallet, and a Dallas Cowboys football game to watch. After he retired from truck driving, he still always had to be on-the-go. He was a real “pool shark” and stored his cues in the trunk of his car for easy access. Kenny played in local, regional, and national American Pool players Association tournaments, and he was grateful for the many and meaningful friendships he formed in the billiard community. He volunteered with Salt Lake County Aging Services, driving elderly and disabled persons to their medical appointments, and he was recognized as “Volunteer of the Year”. He slowed down a bit in recent years, enjoying time spent visiting with family and friends, dining at his favorite restaurants, or just going for a drive.

While we will miss Kenny’s sharp-witted humor, enthusiasm for all things Texas, and caring personality, we are comforted by his awaited reunion with his “sweetie”, Natalie Bossenberger. Also preceding him in death were his sister, Janet Kulberg, and his son, Kevin Bossenberger.

To order memorial trees or send flowers to the family in memory of Kenneth Richard Bossenberger, please visit our flower store.