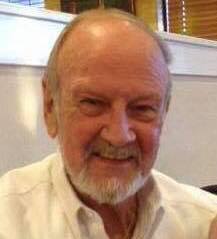 Ogden, Utah - Kenneth M. Weber, passed away peacefully on Friday, March 9th 2018 after giving us 74 years of comfort, care, love, and laughter.  Kenneth was a loving father, grandfather, great-grandfather, and friend, who was called home by the Lord from Washington Terrace Skilled Nursing in Ogden Utah.  Kenneth--originally from Brooklyn, NY--lived most of his life in Falls, Pennsylvania, and the last three years he had spent in Ogden, UT to live out parts of his bucket list.

If any man ever embodied the saying, “You’re only as old as you feel,” it was Kenny.  A wonderful singer, Ken grew up in Brooklyn during the 50s and 60s, singing doo-wop on the street corners with friends-turned-bandmates, and was liable to burst out lines of past songs for the rest of his life (to the amusement or embarrassment of his family is still undecided).  An affable, fun-loving gentleman, he enjoyed anything involving his favorite 3 parts of life: music, the outdoors, and his family.

Camping trips were a frequent occurrence in the Weber household: with things (and kids) packed in and driven as far out into the beauty and relaxation of nature as possible.  This meant lots of time by campfires and fishing, which built an appreciation for being outdoors that was passed down to all 7 of his children: Ken Jr., Scott, Todd, Suzanne, Daniel, Patrick, and Kimberly.

The splendor of Northeast PA was part of what brought Kenny to become a more permanent resident of the area, specifically between the Falls-Tunkhannock townships, at one point owning the Long Pine Inn in Falls. Bringing people together was what made him happy; whether at social events, in the woods, or on a bar stool: the smiles and laughter of others is what truly made him proud inside.  Golfing became another prominent hobby to go along with fishing in finding reasons to be outside, and if he’d known better, he’d have invested in the camping chair industry: all of which proudly displayed “WEBER”, in marker, on the back.

His travels took him from New York, to Pennsylvania, and eventually to Utah, where he proudly detailed his car to let everyone know: “From Brooklyn, New York, to Ogden, Utah!”  Along the way, he created many friendships, and was always available with an awe-inspiring story to bring to the table.  Each new person who met him quickly learned two things: Kenny was born in Brooklyn, and that he had a big family.

Besides his 7 kids, he’s also survived by his 10 grandchildren: Scott Jr., Bri Elaine, Lilly, Brian, Bradley, Connor, Oliver, Logan, Payton, and Neville Kenneth, and considered himself blessed to also experience the birth of his 2 great-grandchildren: Peyton and Bryleigh.  Married twice, and survived by his former spouse of 25 years, Patricia, and previously, Susan, of 32 years, he was incredibly proud to bring up his family to anyone that would listen, and could strike up a conversation with anyone from 20 years old to 90.

He had a big heart, a yearning for adventure, and loved to be out driving--never causing an accident in 74 years.  His sense of humor and outlook on life taught those around him to be strong through what could seem like immense struggles, and although it seemed like he never settled down, his conversations always made you feel at home: he was one of those true people who remind us that the world isn’t that big of a place, and that we all have some connecting thread within us. He will be immensely missed by all of those he connected.

Family and those connections will be gathering in Northeast Pennsylvania at the end of April.  Flowers and cards of sympathy can be sent to 820 Monroe Blvd. #77, Ogden, UT 84404 or a donation can be made in his honor to your favorite charity.

To order memorial trees or send flowers to the family in memory of Kenneth M Weber, please visit our flower store.