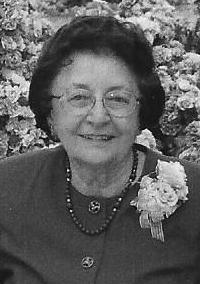 Lena (Cologna) Jusko was born in Rock Springs Wyoming in 1931.  She passed away on the 9th of October.  Lena lived in Reliance Wyoming with her parents, Mary and Joseph Cologna until they moved to Taylor, Utah in 1941.  Lena helped her family on their farm taking in hay and picking tomatoes as a young woman.  She learned to play the piano while attending Weber High School.  After graduating, she worked in downtown Ogden designing store front window displays before getting a job at Hill AFB. In 1954, she met a young Lieutenant, Michael Jusko at a meeting in the basement of St. Joseph’s Catholic Church.  Lena and Mike were married the next year.  Their love and marriage to each other would last nearly 66 years.

The Air Force would transfer Lena and Mike to Alabama, California, France, Colorado, Texas and Ohio.  During this time Lena had two sons, Robert and John.  All of this travel included 2 years of not seeing nor hardly hearing Mike’s voice as he was ordered to Taiwan.  Lena and the boys spent time on the farm while Mike was on extended assignments.  Upon retirement from the U.S. Air Force the family moved back to the farm in Utah.  Lena enjoyed cooking and would prepare fabulous meals from different cultures, which included special dishes from the area of Northern Italy known as the Val di Non.  Her appreciation of music and art encouraged her son Robert to play the violin and John to play the flute.  Lena was an amazing artist and loved to paint.

She was a kind and generous person that always knew how to encourage you to do the best you could do.  Her love for her family was immense.  She will be sorely missed by her entire family, including her grandchildren Sarah and Michael.

Due to the Covid-19 virus, funeral services will be held privately at St. Mary’s Catholic Church.  A memorial service will be held at a later date after Covid-19 is mitigated.  Condolences may be sent to the family at www.aaronsmortuary.com.

To order memorial trees or send flowers to the family in memory of Lena Marie Jusko, please visit our flower store.