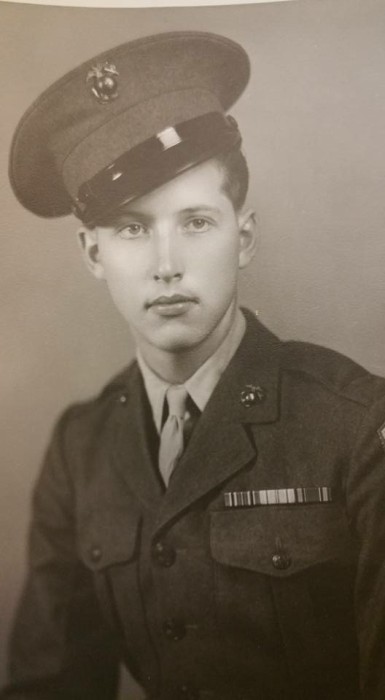 Mel was born on December 5, 1929 in Idaho Falls, ID to Alda Talbot and Stanley Payne. As a boy of 14, his father was killed in an automobile accident, and his mother later married Fred Colson. He grew up working with his uncles, working on farms and construction.

At the age of just 15, Mel coerced his mom to sign the necessary paperwork to allow him to join the United States Marine Corp, serving in the final few years of WWII.  His Marine Corp service was something he was very proud of, and always took time to share stories with other veterans, something he enjoyed throughout his adult life. He was honorably discharged at the rank of Lance Corporal.  The discipline and work ethic continued throughout his life, and something he instilled in his children.

After leaving the Marine Corp, Mel began a career in sales with Skaggs-Stone, which led him to the Bay Area of Northern California.

In 1952, he met the love of his life at a church dance, Lola Stam. He immediately knew “she was the one” and after considerable persuasion, began courting Lola.  They were married in the Salt Lake Temple of The Church of Jesus Christ of Latter-Day Saints in 1953, and shared 60 years of life together, starting in San Diego, CA, moving back to the Bay Area in the late 1950’s. The family eventually settled in to call Santa Rosa, CA home in 1973.

Mel’s sales carrier was cut short in late 1973, when complications from a previous surgery began a series of medical conditions that nearly took his life on multiple occasions. This led him to pursuing work in landscaping, his true passion.

In 1988, Mel and Lola moved to Layton, UT to be near their youngest daughter.  They fostered many wonderful friendships and relationships with all they met.  One of the pleasures they enjoyed were frequent road trips with Dick and Joan Stam, and Tom and Marge Stam, Lola’s brothers. He loved telling the stories of their trips to the Cowboy Poetry Fes0itval in Kana, UT. There, he and Dick could be the cowboys they dreamt of. In 2007 Gretchen and David added rooms to their new home to accommodate Mel and Lola for what would be the duration of their lives.

Mel was a devoted member of his faith, serving in several leadership and teaching positions before his progressive deafness made it difficult for him to communicate. After his second broken hip, Mel decided that he would stay at the Veteran’s home, where he had constant care, but greater than that it fostered his story time with the other veterans there.  Mel was active in ministering to his fellow veterans as well, and particularly enjoyed that spiritual aspect.

He is survived by his son Jan Ivan Payne of Midvale, UT, and daughters Nena Miriam Payne of South Jordan, UT and Gretchen Liesel Brimhall (David) of West Point, UT, 13 Grandchildren, and 12 Great Grandchildren, and brothers Bill Colson, of Alaska and Jim Colson of Idaho Falls, ID; as well as beloved in-laws, nieces and nephews.

Mel was a strong patriarch of his family, and a good friend to all. He was very proud of his posterity, a good father who always took care of his children and did the best he could to teach and guide them, a loving grandfather and “great-grand” father, the absolute joys of his life.

Due to Covid restrictions, the family will hold a private graveside service on Monday, February 1, 2021 at 11:00 AM MST.  Those who would like to participate via Zoom may do so using the following link, https://us04web.zoom.us/j/79020687132?pwd=vmh30s9avfbrm0virijrrmg4efjput09

To order memorial trees or send flowers to the family in memory of Melvin Stanley Payne, please visit our flower store.