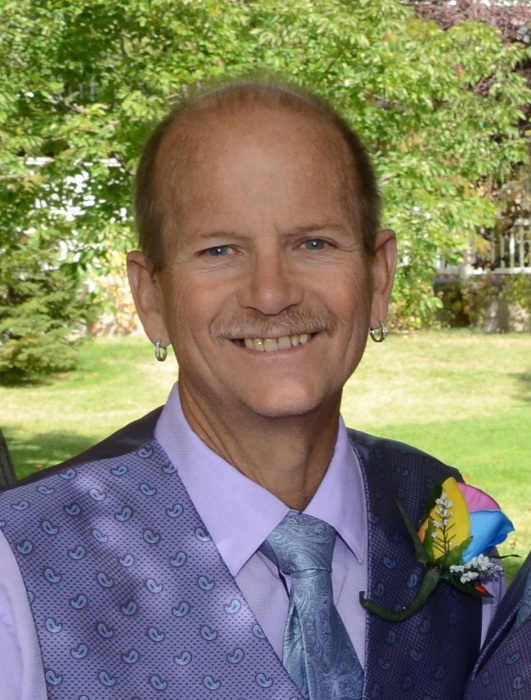 Russell Lynn Griffin was born in Brigham City, Utah, on July 10, 1963.  He passed away peacefully on August 5, 2018, at Ogden Regional Medical Center surrounded by his family and friends.  Russell courageously battled end stage renal disease for 16 years.  Within the past year, Russell was diagnosed with numerous health problems.  Despite his extreme will to live, he unfortunately succumbed to his ailments.

Russell attended Box Elder High School and was the very first "Bee" mascot.  He moved on to being employed by "a very large accounting firm" for over 30 years as a computer specialist/analyst where he made many freinds nationwide.

Russell believed in "paying it forward".  He was always willing to help others in need and never missed an opportunity to surprise you with his clever and witty sense of humor.  Russell was involved with two non-profit organizations known as the Imperial Rainbow Court of Northern Utah and the Royal Court of the Golden Spike Empire.  He served as co-president for two separate one-year terms for the Imperial Rainbow Court of Northern Utah.  Russell always enjoyed fundraising events with the organizations as he was full of life and no stranger to a good time.

Russell's favorite place to visit was the "happiest place on earth", Disneyland, where he could be close to Mickey Mouse for whom he had a profound love for.  Russell had a goal to take his husband, daughter and grandchildren to Disneyland sometime during the next year.

We would like to thank Dr. Harry Senekjian, the many nurses and technicians of the University of Utah Dialysis program for all of the care and support over the years, Dr. Joan Balcombe and staff at Ogden Regional Wound Care for the compassion and care Russell received.  A special thank you to Lindy from CNS Home Healthcare whom became not only a care provider but a very dear friend.

In Lieu of flowers, the family would like to request that donations be made to the National Kidney Foundation of Utah in Russell's name.

To order memorial trees or send flowers to the family in memory of Russell Lynn Griffin, please visit our flower store.